Off With Your Head Game Design Doc

Design Journal - “Off with Your Head”

Designing our board game, we had to keep in mind the certain constraints given to us; 1. A cooperative team setting wherein all players either win or lose 2. Utilizing a “press your luck” mechanic 3. There must be some sort of element in the game that requires the player(s) to use memorization. With that in mind and a blank canvas in front of us, we shot out ideas, discussed influential games, and mechanics. Our first two brainstorming session were very high energy and ideas were quickly being built upon one another in a natural flow. Eventually all paths led us to an idea we all really liked. We conceptualized a game where you and your teammates role play as advisors to a “mad king/queen.” As mistakes stack by the players, eventually one will be the one to break the camels back and thus, the whole team is ordered to be beheaded by the king/queen.

Speaking in gameplay terms, you play the game through the combination of deck drawing, matching cards, and pulling blocks from a Jenga tower.” How does all this work?”, we asked ourselves. Taking this a step further, we discussed what our playthrough would look like. The game is set up first by drawing cards from the deck and placing them faced down to create a 3 x 4 grid. A card represents “a foundational pillar” in the empire (war, wealth, law, religion). 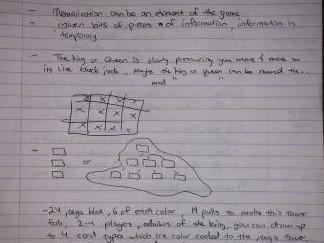 The first advisors turn begins by drawing two cards. The two cards that are now in their hands must match the same suit of cards from the grid of cards placed faced down. To proceed, your two cards are placed face up and on top of your chosen faced down cards. To resolve, you flip the bottom cards to now see if you made a pair. If you successfully pair the suits, you’re in the clear! If not, then you must pull a block from the Jenga tower for each pair you unsuccessfully match. 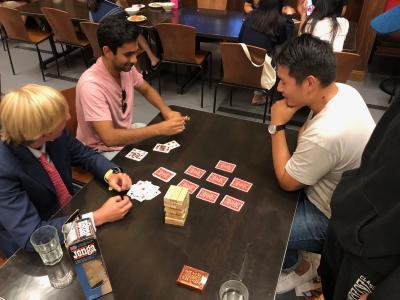 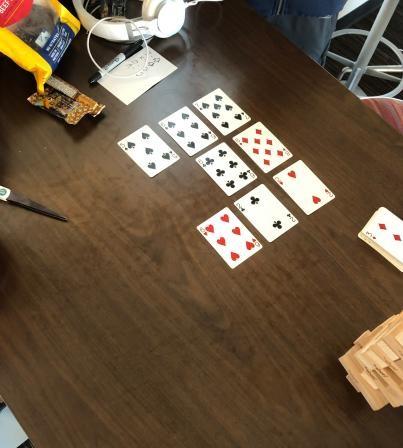 We decided to keep the rules of Jenga the exact same as you would when playing the game separately aside for two formal elements. The first element we changed was the amount of Jenga blocks that you played with. Charlie calculated that if we played the game with 24 blocks stacked, we had about 14 pulls to make the tower fall. Our second idea of alteration was to assign 4 colors to our Jenga blocks and evenly distributed the colored blocks when stacking. This increases the challenge of our game by limiting which blocks you were able to pull.


Our next best option was to begin internal playtesting with what we had written down so far. We played our game and began testing the most fundamental elements of the game. Our strategy started by looking at the fundamental systems in our game and questioning all of its formal elements. We would playtest and keep a close watch on a single element, changing it ever so slightly to see how our game would play out. “Does this work? Is this complimenting the player experience we want?” we would always ask. After hours upon hours, we changed the placement design of our cards that face down, the number of cards you draw, how many cards are in a deck, and other minute tweaks to ensure that a single game sitting would not go over our 12 minute mark. A big question we answered too was what a winning condition looks like. Filtering out options, one that made the most sense was to successfully run out of cards to draw from the deck. We felt like we were making headway with our player experience. The next step was to playtest our “press your luck” mechanic after we had nailed down first what we wanted. If a player is not able to remember what cards in the grid could match the pair of cards in their hand, they may ask one advisor at a time if he/she could help them guess in finding their pair. For every person you ask for help, is another block you must pull from the Jenga tower if a players turn is resolved and the pair is still not a match.

Eventually our internal playtests stopped being so helpful in giving us deeper insight and so we began hunting external play testers. We had two groups, one group play tested in the Dining Hall and the other play tested in CTIN 488 Lab. Our play test reports showed us that our game was too easy, our etiquette for asking another advisory for help was confusing, our rules were too confusing, and that the punishment for making a mistake wasn’t a big deal because you could ask your partner(s) for help. It was a tough pill to swallow however everyone told us that our foundation was solid and the theme/story of the game was lovely. Pressing forward we came together as a group to fix the issues of our game. We knew at this point we had to be extremely careful to not attempt fixing our rules by adding more rules. We needed to look at the fundamentals once again and work from the inside out.

We got rid of our older idea to color code Jenga blocks because that would add unnecessary complexity. Making more pivots, we fiddled with our rules of etiquette when asking another player for help. We trimmed off some fat making it simpler. You call on one person at a time, ask help via yes or no question, and that’s it. More changes included adding in another suit to our game to a total of now 5, replacing our Jenga tower as the center of the board, redesigning our facedown cards to circle around the Jenga tower, and everyone at the start of the game is now allowed to pick up two faced down cards before the game begins and learn what suit is where but not tell other players. Slowly but surely, we getting to where we wanted to be. 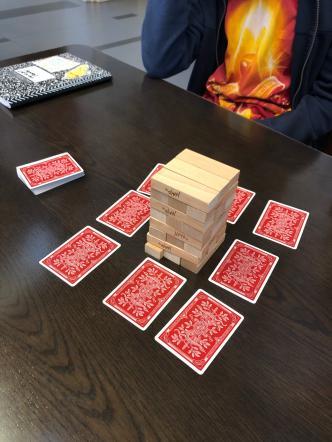 With the last few days coming in sight we began implementing the visual theme of our game. Ani and Evan handled packaging and artwork. Evan crafted a package for our board game which was two pieces. One package carried our cards and another carried our Jenga pieces along with everything else. Ani oversaw the artwork that was to be covered over all the physical objects that Evan created. We put the game together, replacing placeholders with our newly crafted artwork.

One final external prototype would do the trick. Our final report indicated a smoother process of gameplay, one where players understood the objective quicker than before. We added illustrations and reformed our sentences within the rule copy of our game. Players reported their enjoyment of the premise, the cooperation, and how multilayered the game is. 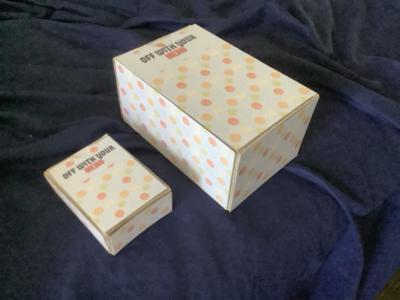