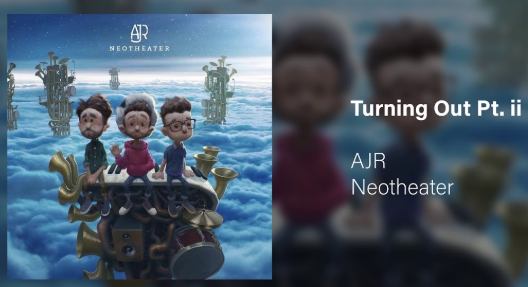 My inspiration & background: “Turning Out Pt. ii” by the indie pop group AJR. A sequel to the soul-searching “Turning Out” from the EP What Everyone’s Thinking, the songwriter, Ryan Met, describes it as a tearjerker. “It was the hardest song I’ve ever written. 100%. We don’t even wanna play that one live, ‘cause it’s such a sad, brutal song.” 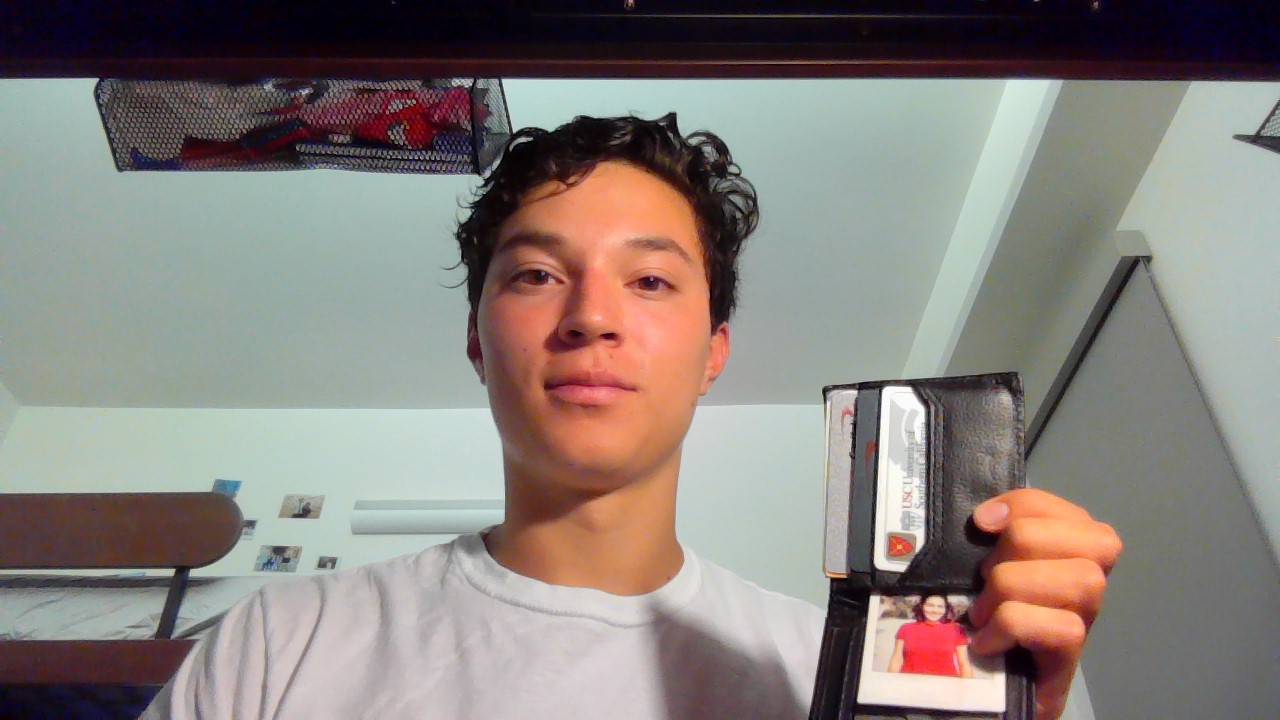 The target emotion of the player experience: Heartbreak 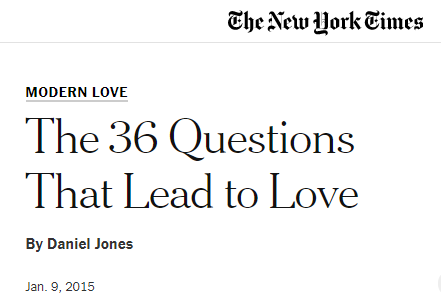 Earliest iterations of the game pull some questions verbatim from a psychological study on love and affection, published in the New York Times by a participant in the study.


The questions begin as surface-level ice-breakers, but gradually escalate in depth and personal connection. 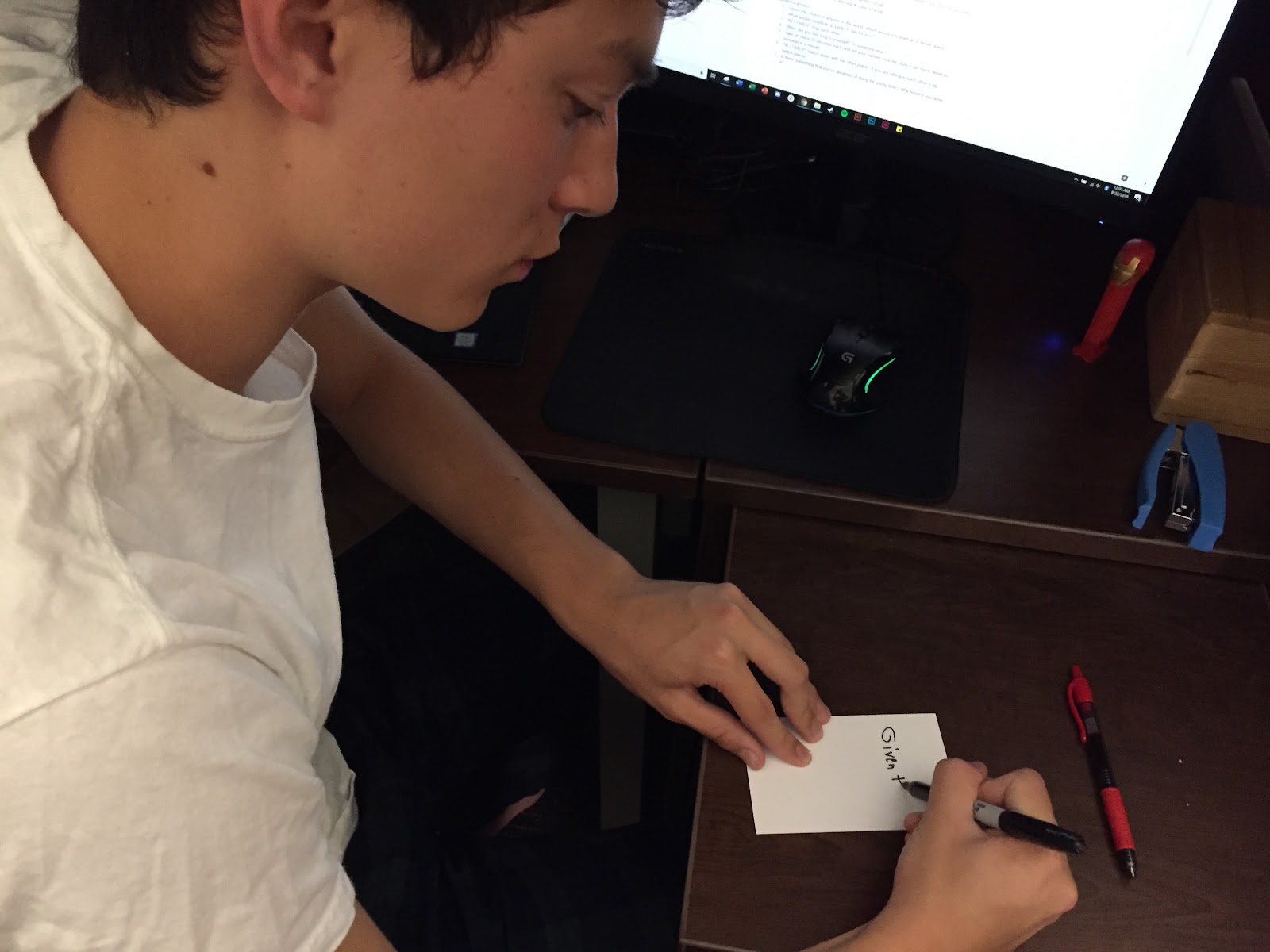 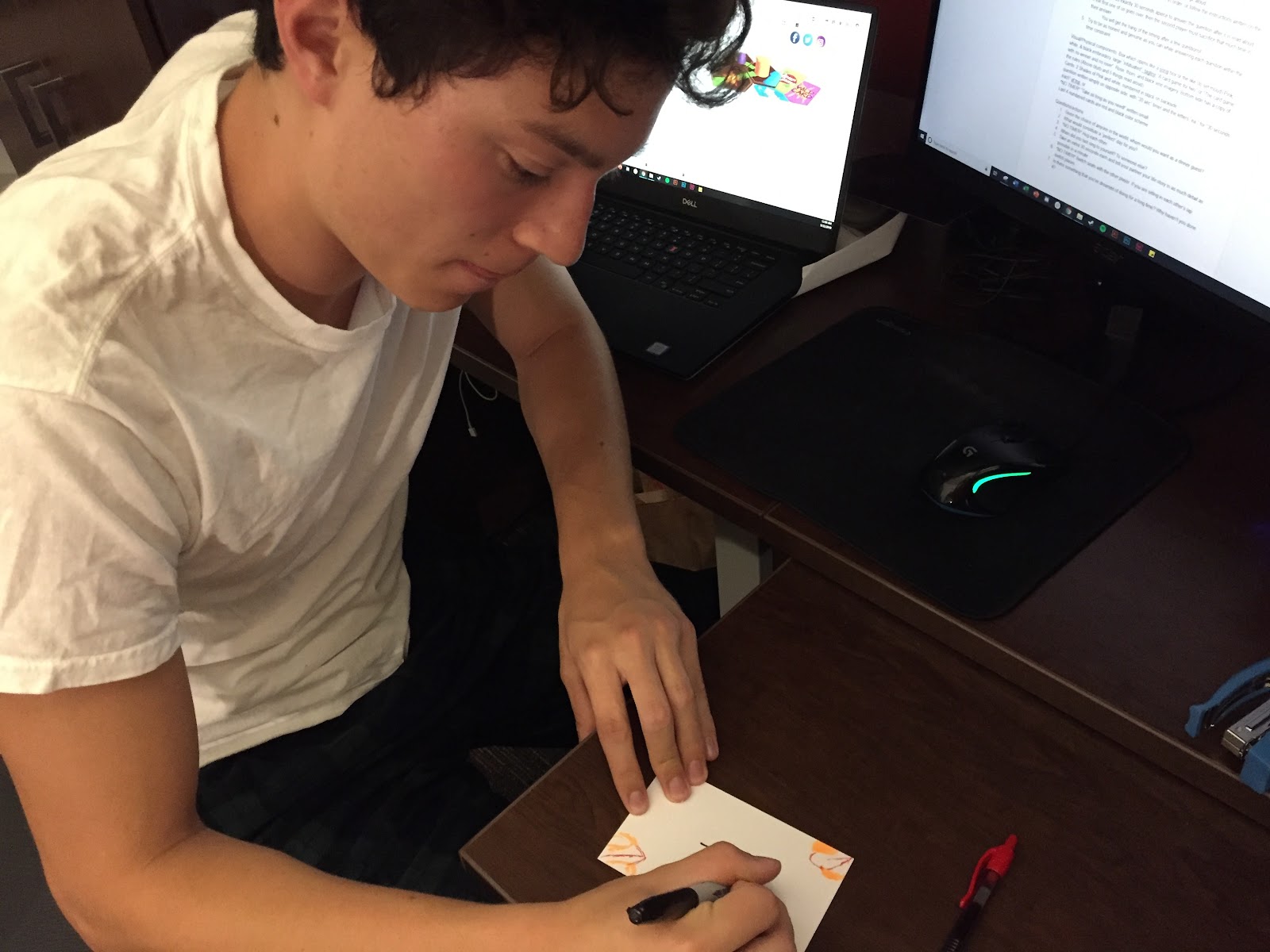 The first prototypes are made:

9/22/2019
To minimize playthrough length, only 7 questions are included and a 30 second time limit is set for each player to answer the questions. The questions are carefully selected and interspersed with bonding actions such as hugging and staring into each other’s eyes. 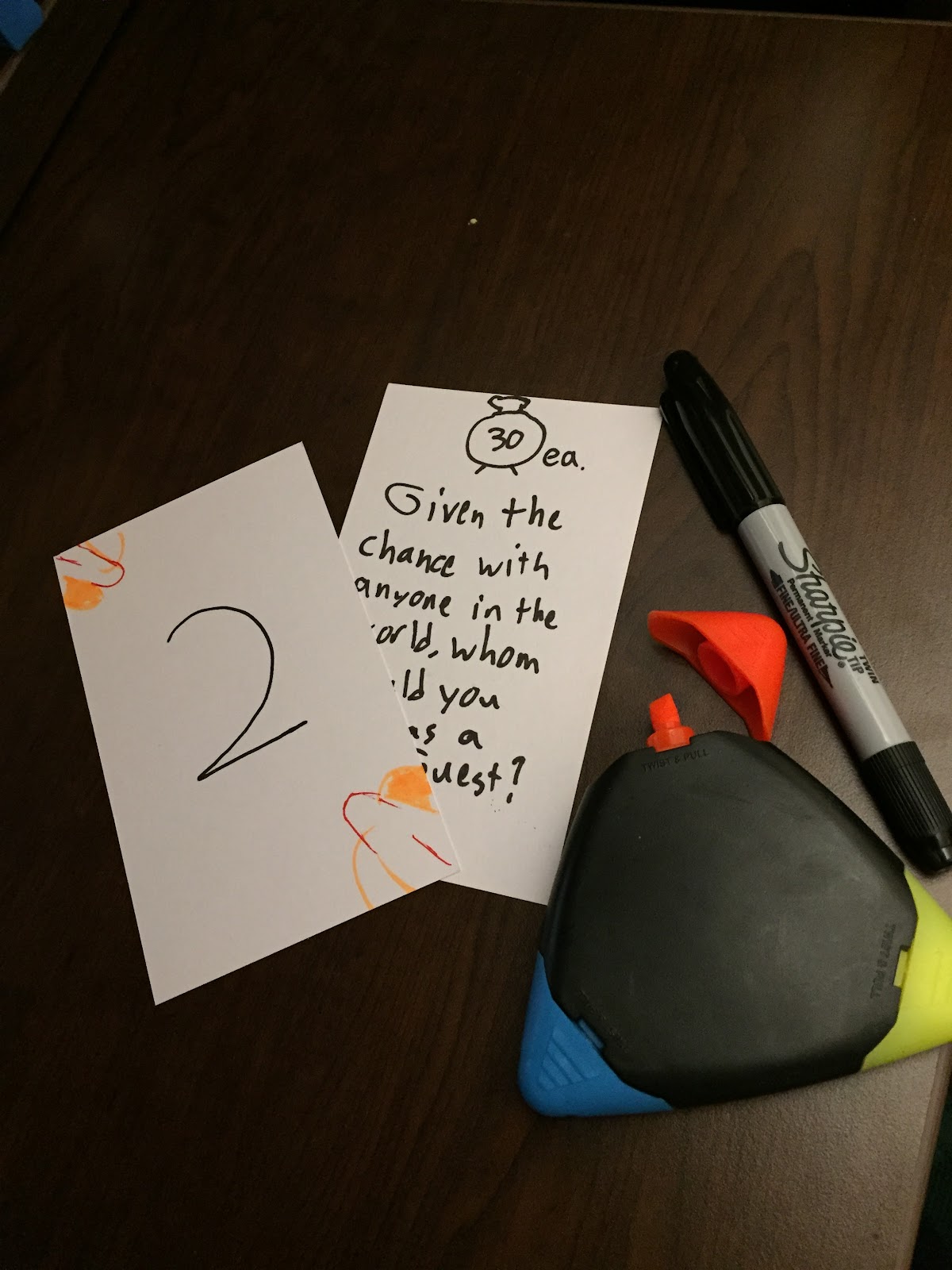 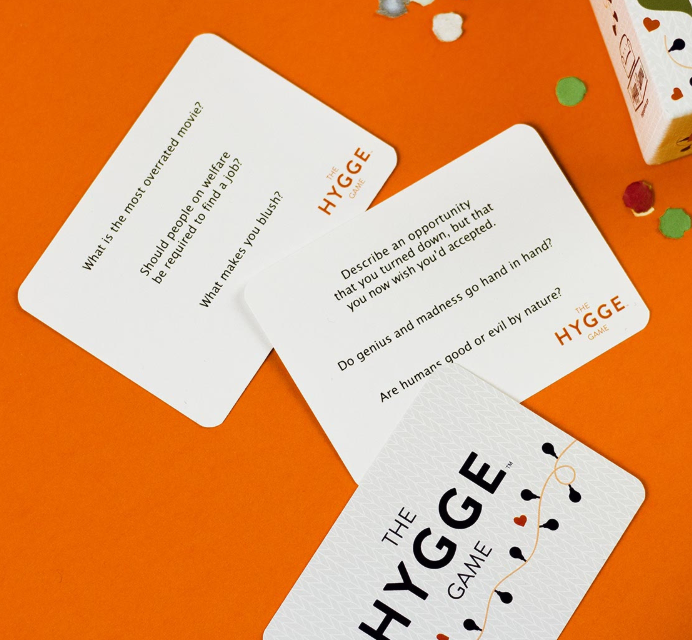 Card design inspiration from Hygge, an antigame with no scoring meant to incite “cosy conversation in pleasant company” 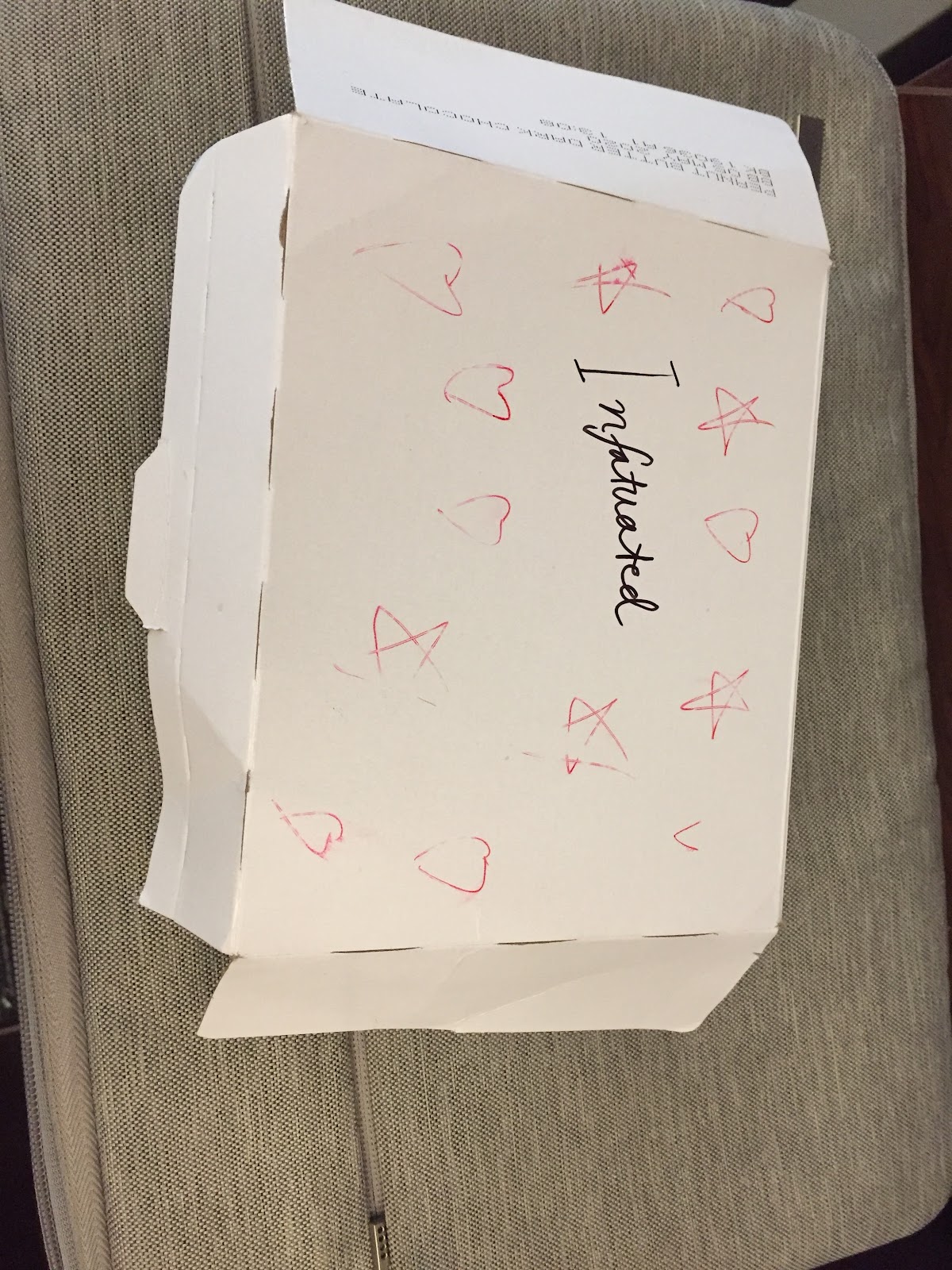 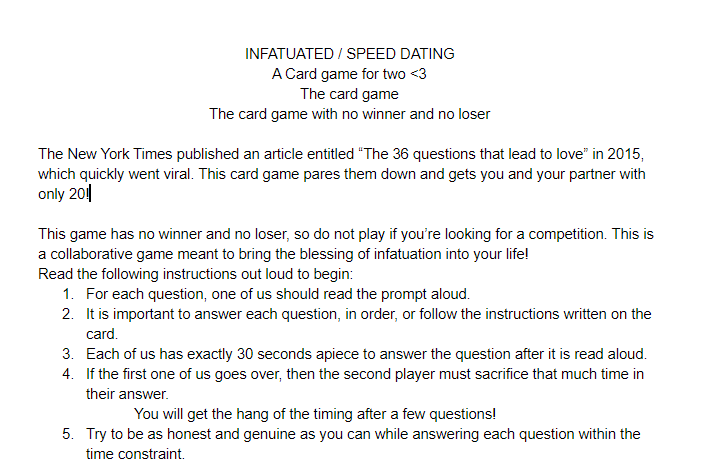 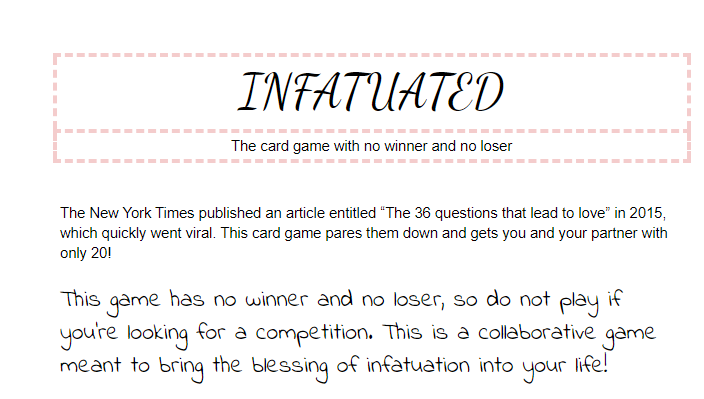 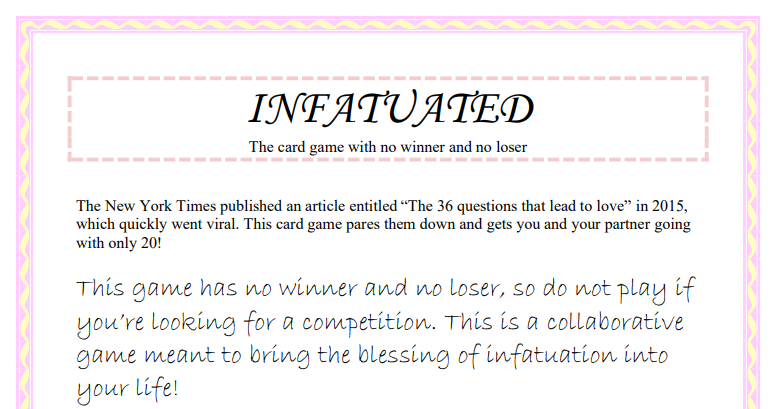 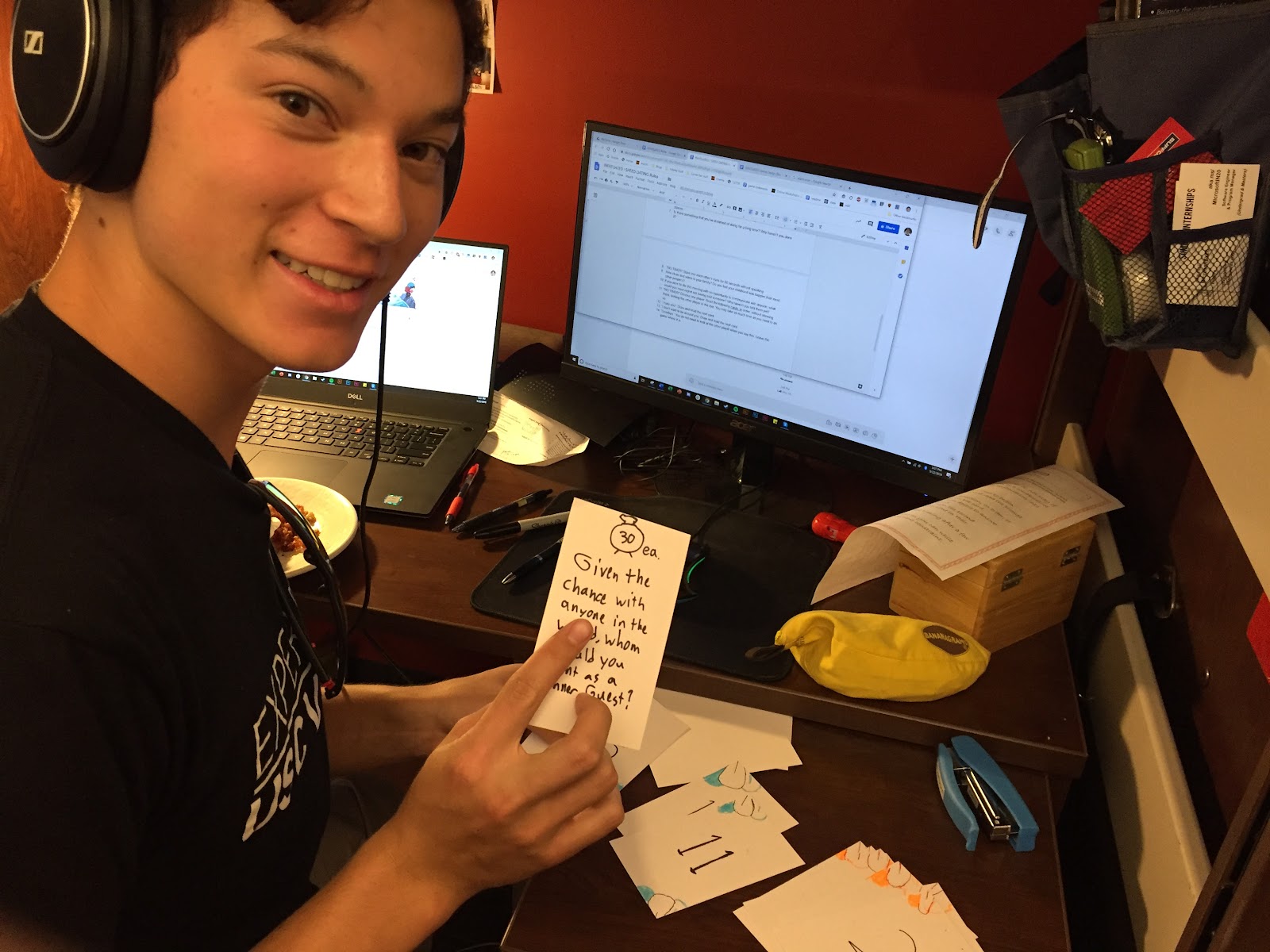 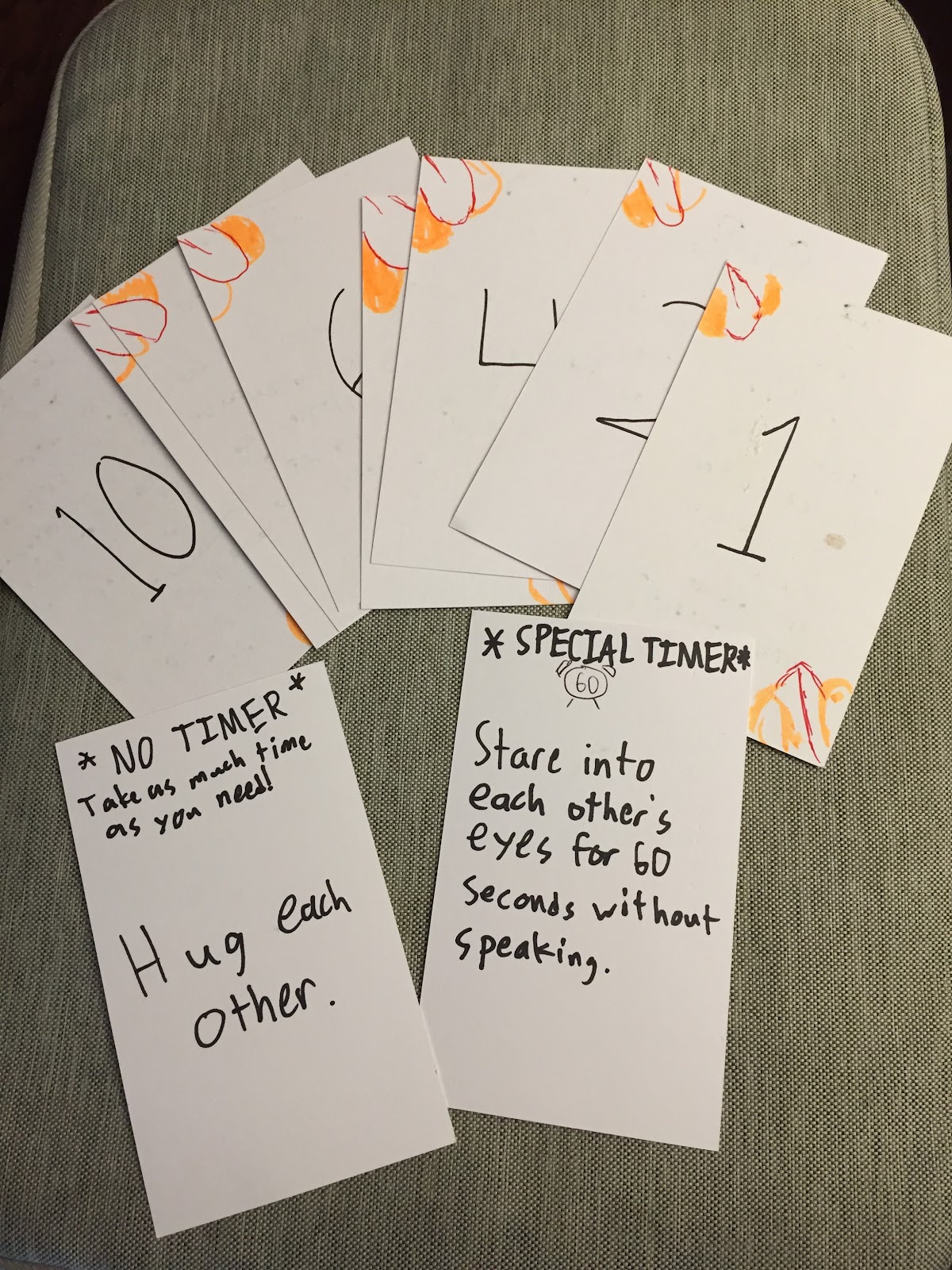 Initial prototype: 14 cards total, though instructions lead players to believe there are 20, to be played in prescribed order. 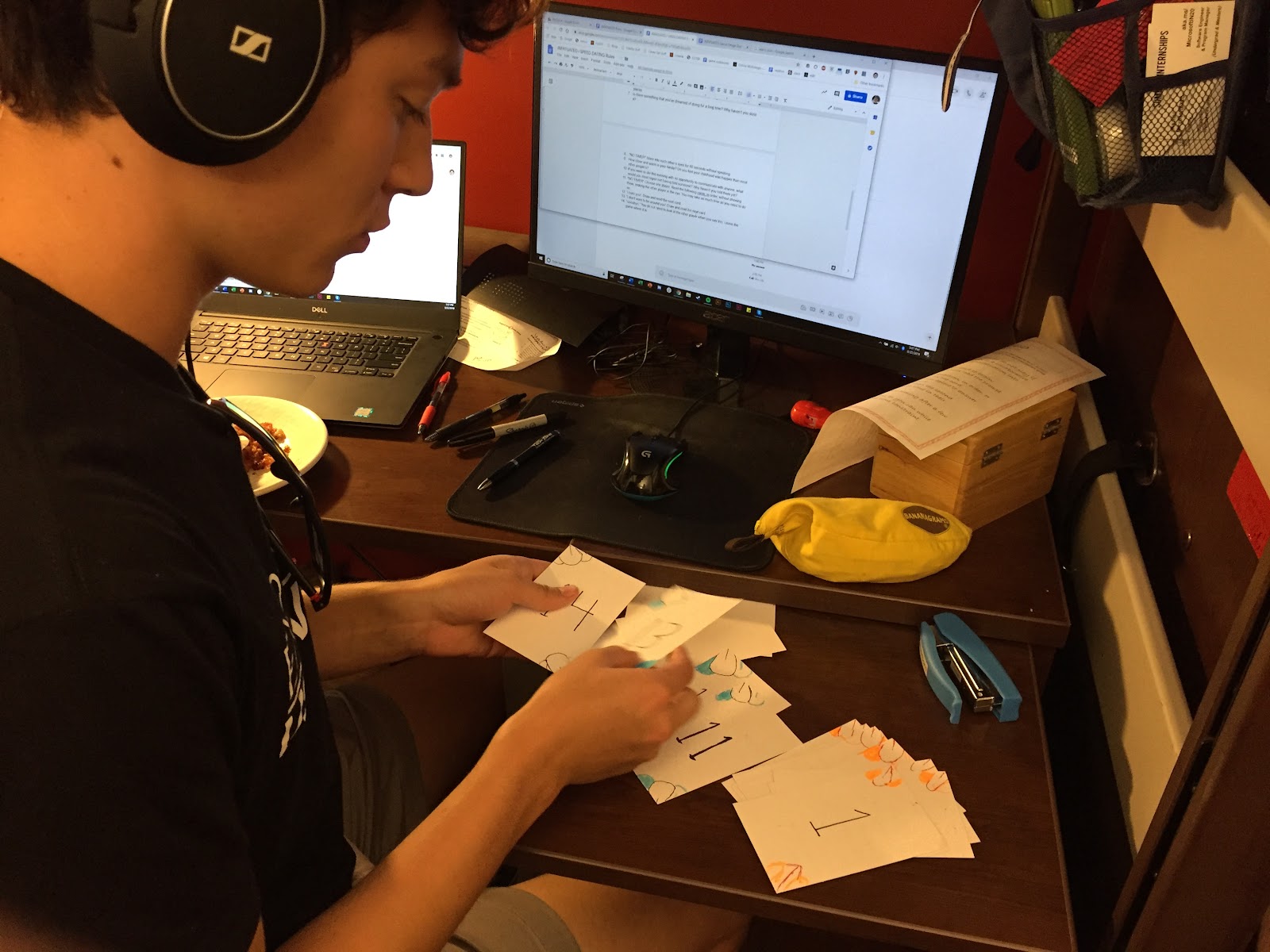 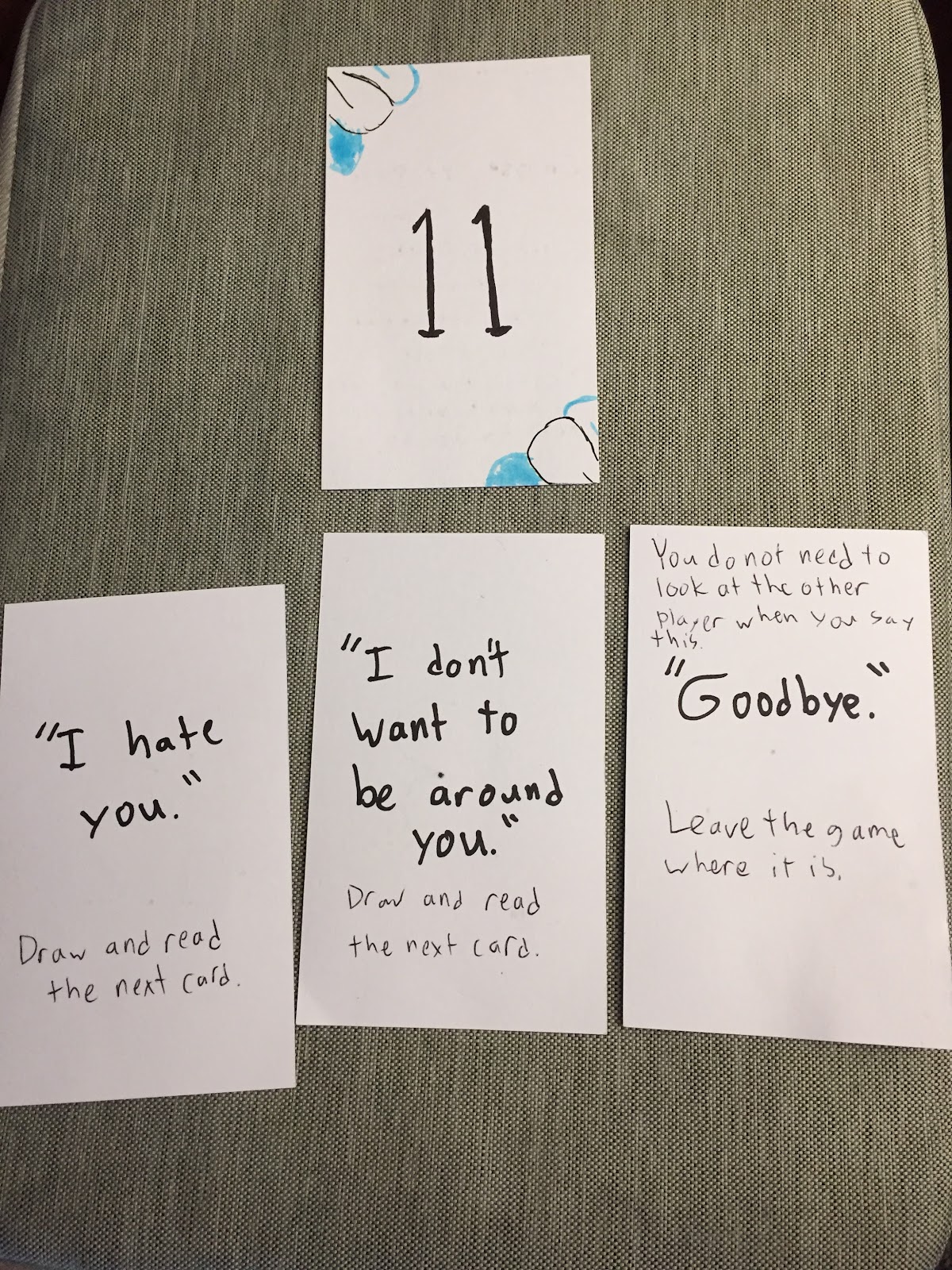 11th question has special instructions, shifting diction from “partners” to “players” and has players choose one player to say the words on the following three cards looking into the other player’s eyes. The time constraint is eliminated 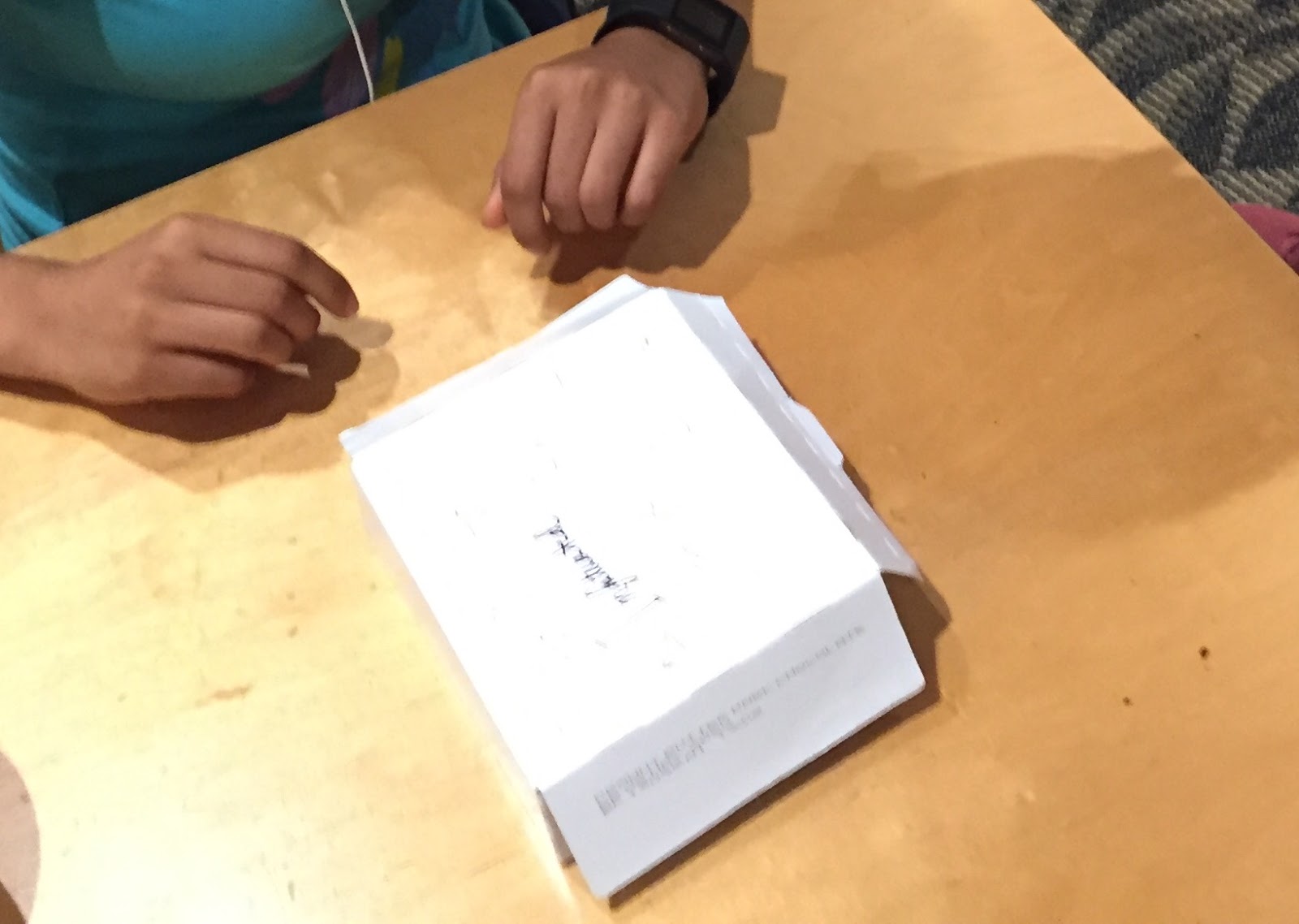 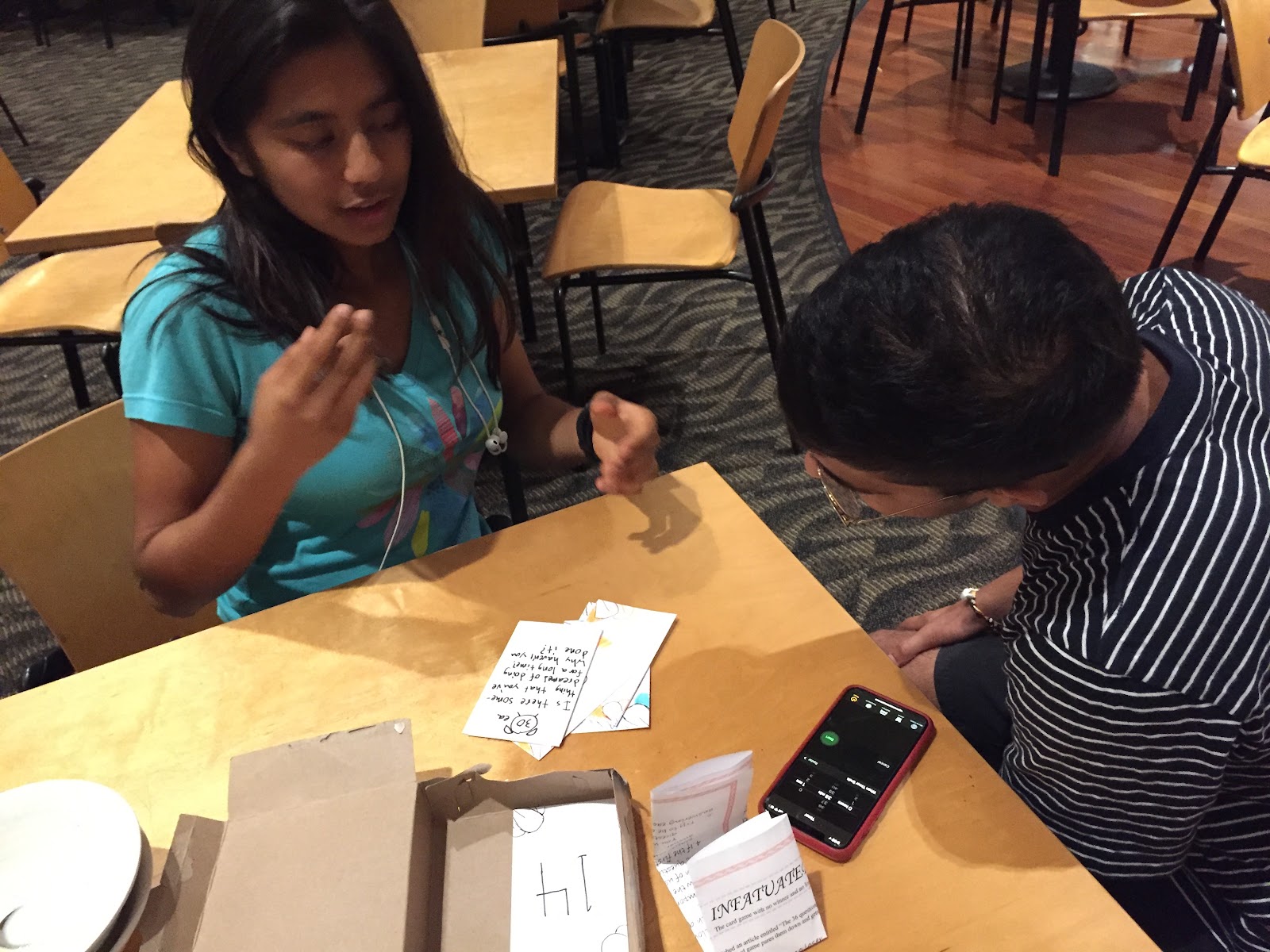 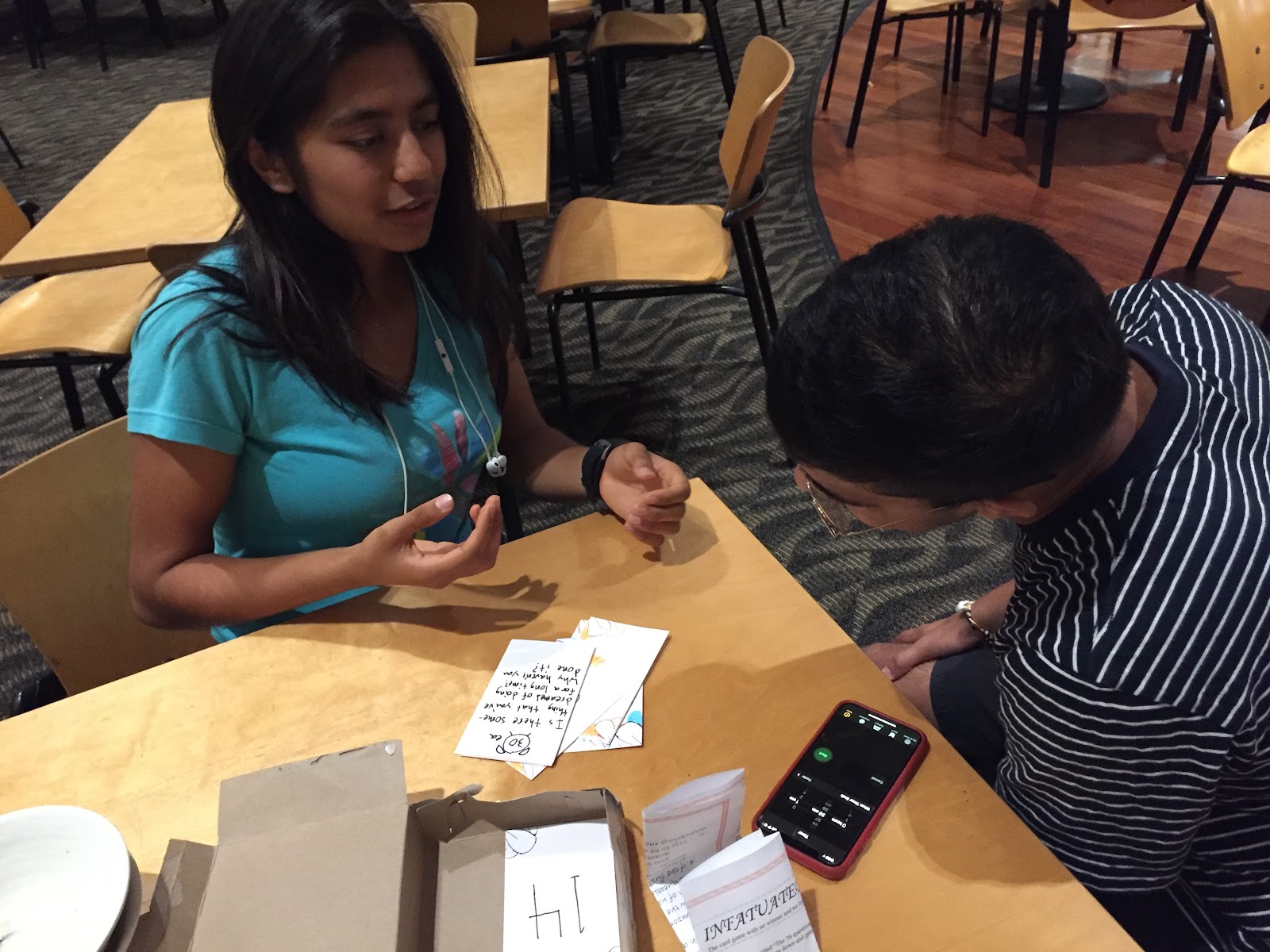 Playtesters: A pair of close friend. Playtester 1 on left, Playtester 2 on right


An iphone timer is used to track each answerer’s time

The phone alarm is loud and interruptive, plus the presence of phone is distracting.

Switch to subtle timer that ticks loudly at the 30 second mark and goes off at 60 seconds.


Playtester 1 could not look in Playtester 2’s face when delivering the final three cards, and showed cards; breaking rules. 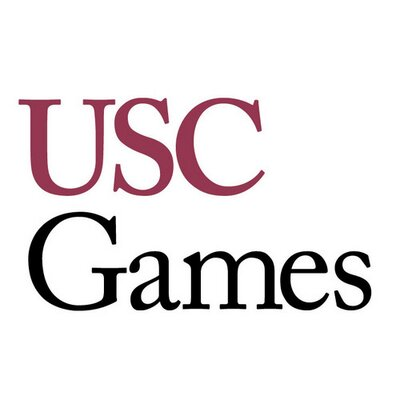 Playtesters: a pair of acquaintances both studying game design

Notable audience of workshop instructor and several observers. No pictures of the session were recorded.


Very interesting and successful playtest, with the emphasized emotions being “confused”, “betrayed”, and “upset”


Observers recommend Fog of Love for inspiration, Love Death & Robots for examples in pacing of a narrative in a limited time (10-minute-long episodes), as well as experimenting with trust as a component of heartbreak, 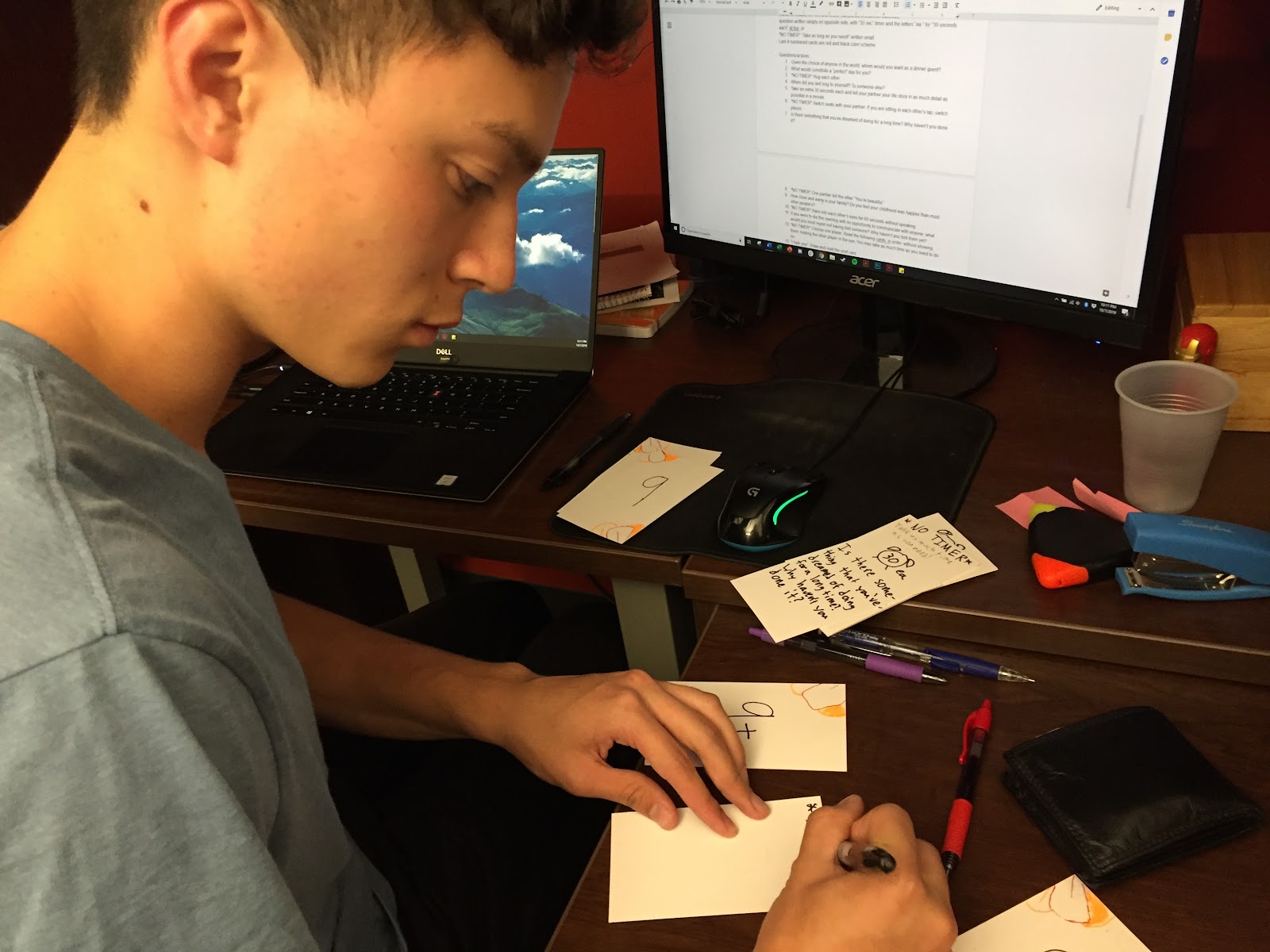 Toyed with player information model (symmetric vs asymmetric knowledge) to no avail.

Added “One player tell the other ‘you’re beautiful’ ” card 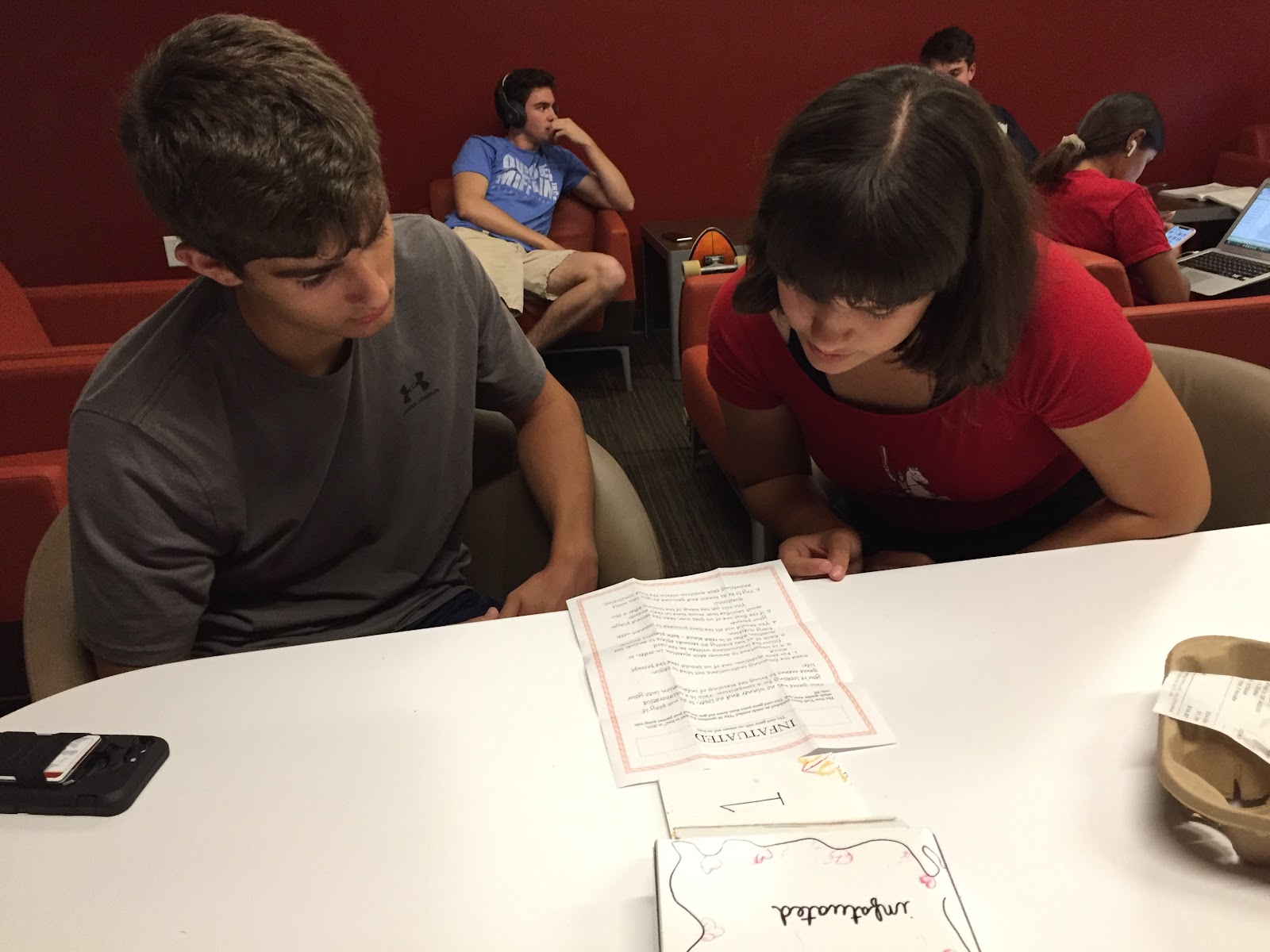 Playtesters: a pair of students on the same floor, who know each other fairly well. Pictured before and after “switch seats” card 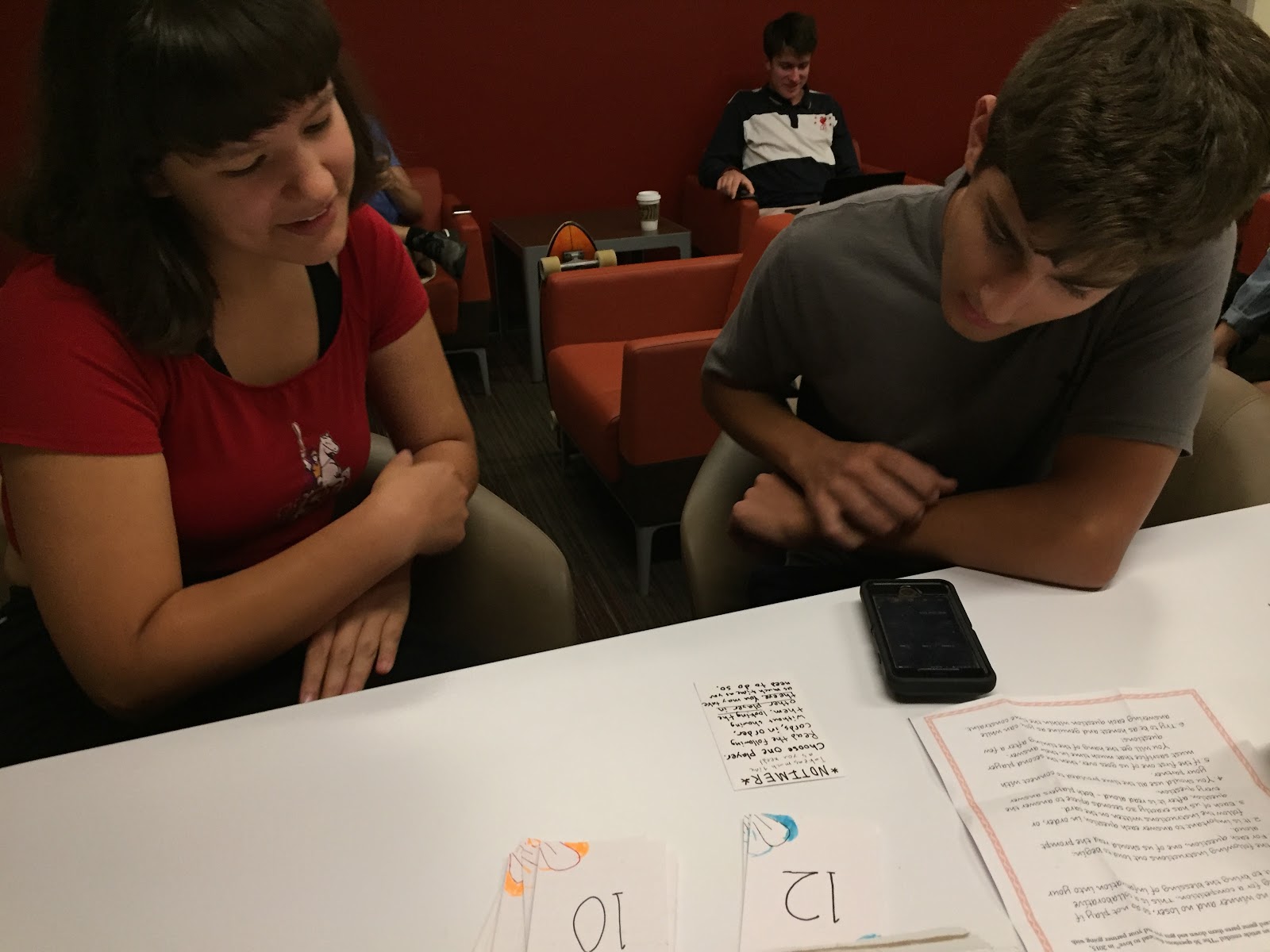 (bottom) Playtester 5 on left, 6 on right 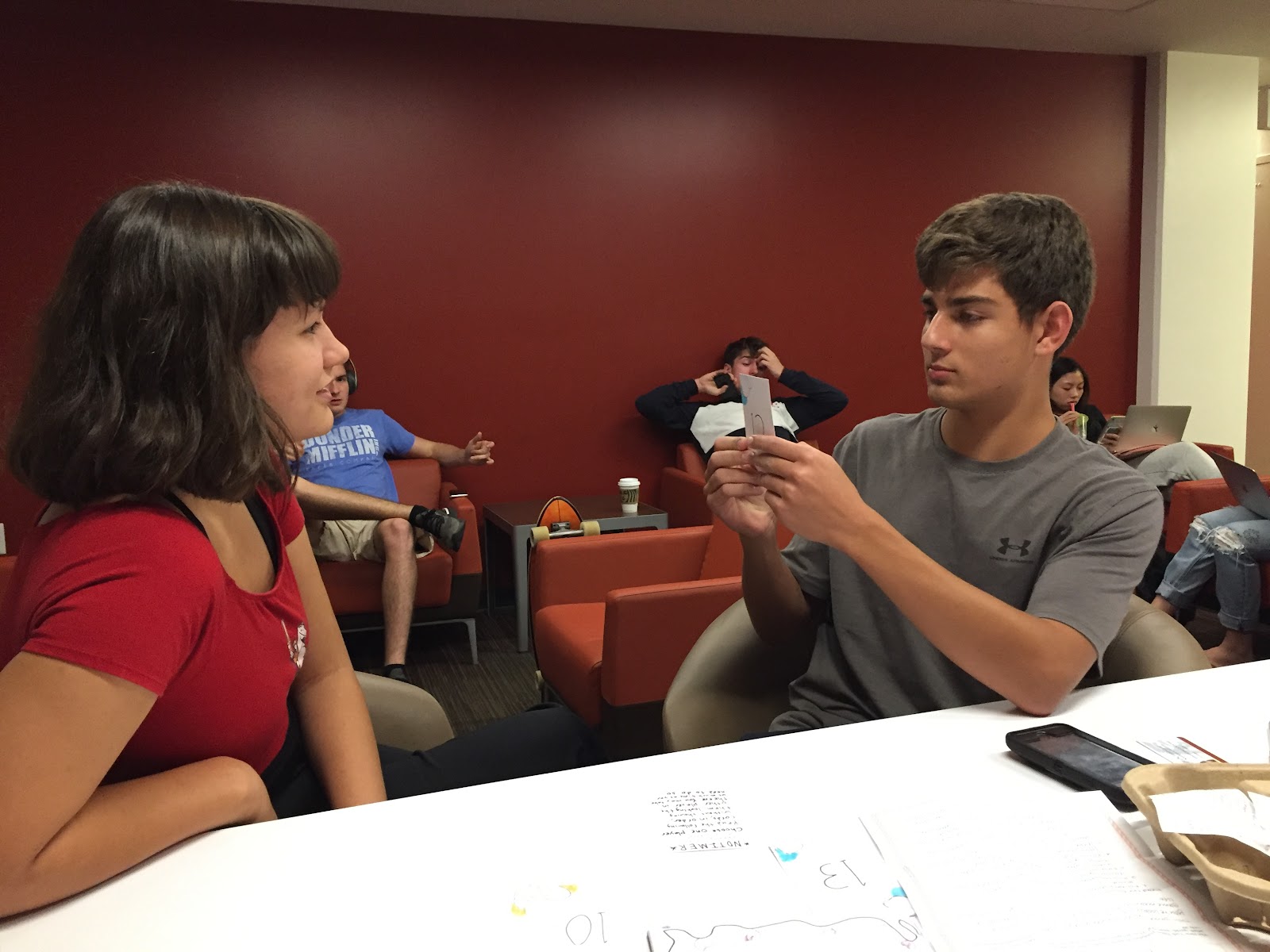 Opposite player had told him “you’re beautiful” only minutes earlier, and waits nervously.

She is taken aback and blinks furiously for a few moments before composing herself with a stone face. Plays off game as “awkward” and emphasizes “lighthearted” feel to first portion 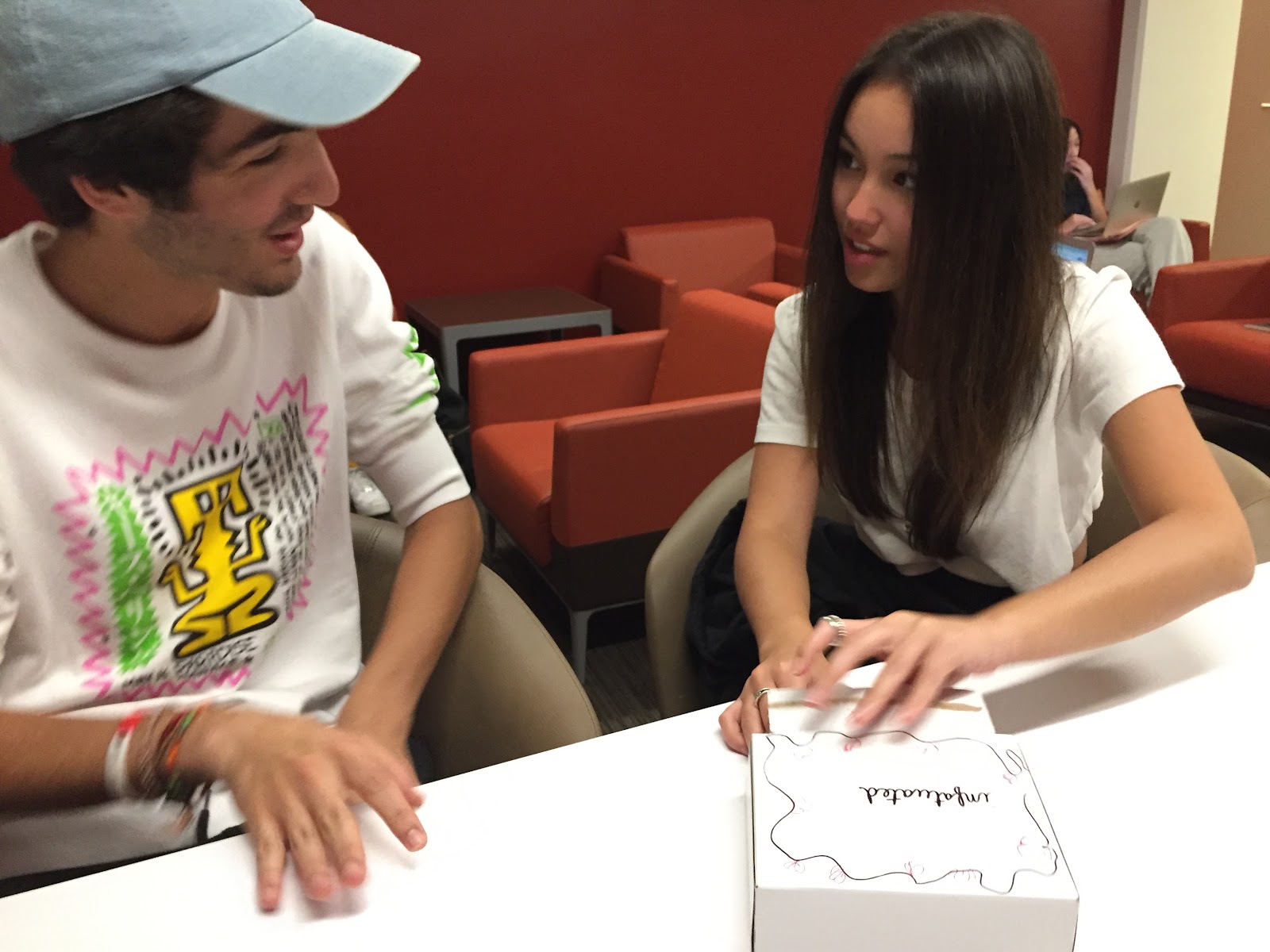 Playtesters: pair of students studying together and actively flirting

Playtester 7 on left, 8 on right 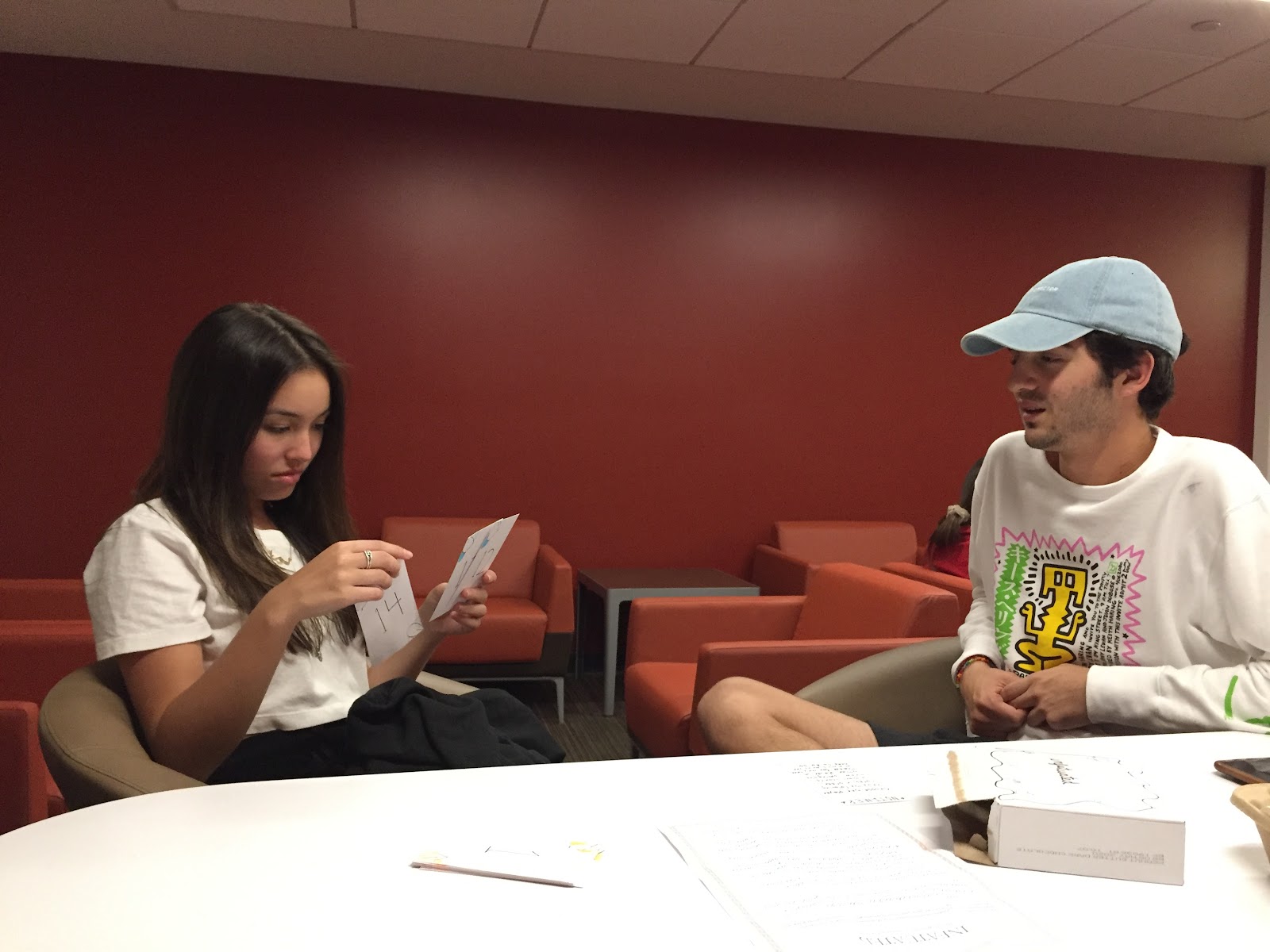 “What did I do?” - Playtester 7 description of how he felt after “killing” cards.

Playtester 8 felt like the cards attacked her, saying they were “super hurtful”

Experimented prefacing killing cards with “Time for the Truth! one player answer the following prompts”


Did not mesh well with other aspects of the game (timer, consistency of mutual actions, etc) 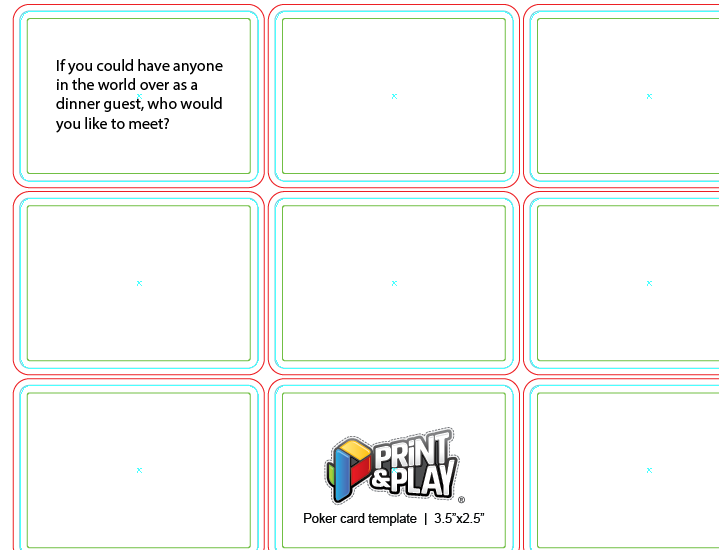 Players vocalized that they liked the handwritten design because it felt more “spontaneous”.

Off With Your Head Game Design Doc

October 23, 2019
Takeaways Combining disparate game mechanics inevitably leads to new and interesting games Memory abilities vary widely between players, making it a useful game component to segment the market (only players with good memory will enjoy memory games) Block towers' aesthetics naturally induce a sense of fear and excitement in players, making it a useful component to be added to other games E.g. Dread by The Impossible Dream Players have a natural tendency toward competition, even within a cooperative game such as this. To combat this, it is useful to have an artificial opponent piece to "compete" with Design Journal - “Off with Your Head” Team Members: Alan Karbachinsky, Ani Devoian, Evan Wright, Charlie Feuerborn Initial Design Designing our board game, we had to keep in mind the certain constraints given to us; 1. A cooperative team setting wherein all players either win or lose 2. Utilizing a “press your luck” mechanic 3. There must be some so
Read more